Data and The City | Design Challenge by Utopia The challenge was part of an initiative  by the Data for Development Program, where a group of events celebrating Open Data Day was taking place. The idea of open data was merged with a pattern of issues Utopia had exploring urban innovation for slums and their cities. Urban informality and mobility are attempts to reframe ongoing urban issues, and open data would be a way to introduce a different angle in the framing of this issue.

Nepal faces a variety of data-related issues. There is a dearth of data in Nepal, and the little data that is there isn’t accessible thereby rendering it useless. Open data, or baseline information would be helpful for any organization, government entity, or individual, and would be utilized by many actors from different sectors. When you’re trying to make decisions such as assessing a market to introduce a product, start a sanitation campaign, or establish a school in a certain area, having baseline information to start is helpful.

The data that is available in Nepal, mainly taken from the census, is also outdated and exclusive. Especially informal settlements such as slums, areas that Utopia works with, aren’t included in the census at all, so there is no publicly available government data about them. The Data for Development program is working for transparency and inclusivity of data, particularly those produced and used by civil society. Similarly, access and usability of data is important too, because raw data that’s available but difficult to access in small streamlined quantities would also be unhelpful. 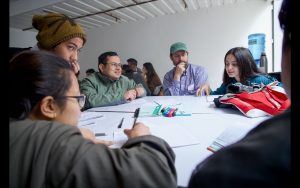 The participants for the design challenge were well curated: 3/5ths were representatives of organizations and individuals who had experience with informality or mobility, and 2/5ths were technical people or those interested in human-centred design.

Human-Centred Design was used both days. On the first day, participants when through an intense process of  thinking about and practicing mindsets and conducting user research, where people went to interview potential users to understand their needs, aspirations and fears. There were 6 teams that used this process to define and pitch one problem statement. The problem statement that was most selected was: how might we build critical skills for urban migrant youth to improve their livelihoods?

The problem statement coincidentally covered both themes of informality and mobility. On the second day, the challenge was then to come up with different ideas and prototypes surrounding the problem statement, that would utilize open data. Through the process of human-centred design, participants spoke to possible users, brainstormed many ideas and made models, got user feedback, refined the models, and then pitched their prototypes to a panel.

The Working with Urban Data panel showcased how practitioners in Nepal use open data across different professions, and was composed of the CEO of Tootle, a prominent journalist from the Kathmandu Post, the urban waste manager from Doko Recyclers, and the head of Pravasi Nepal Coordination Committee.

Utopia has now embarked on a 6 week prototyping period with 4 participants from the Data Challenge, and a 5th member who is a former urban migrant youth. This process, facilitated by Utopia, will lead the team to design and refine a solution that tackles the issues identified by their users. 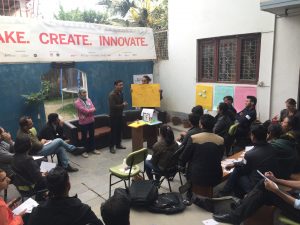